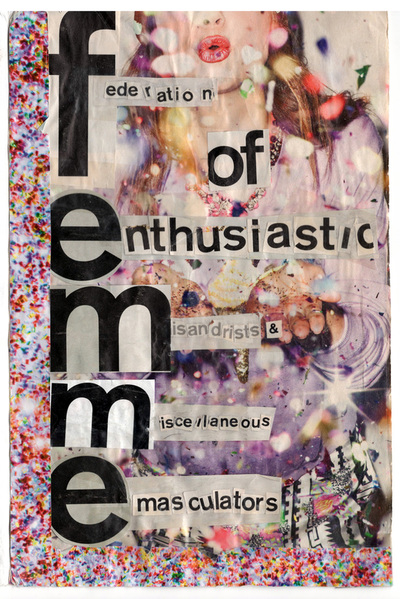 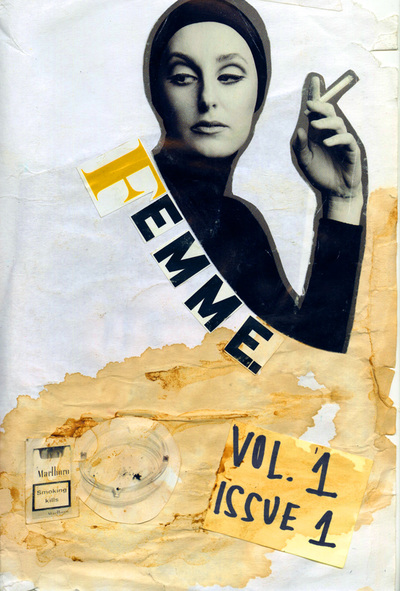 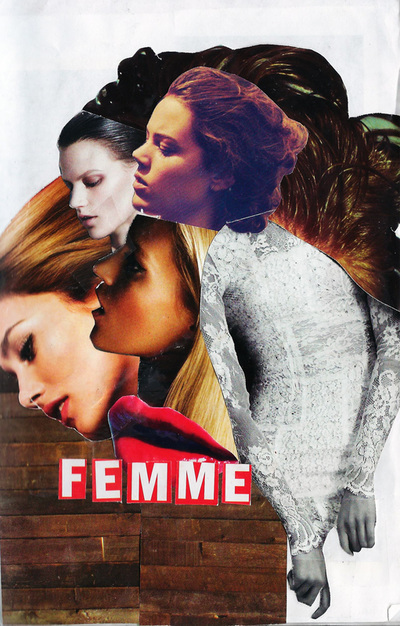 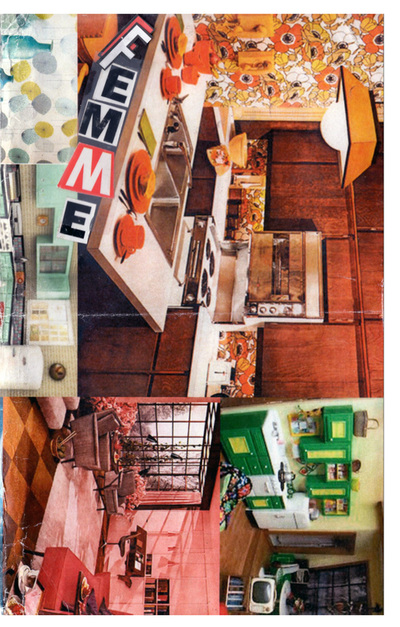 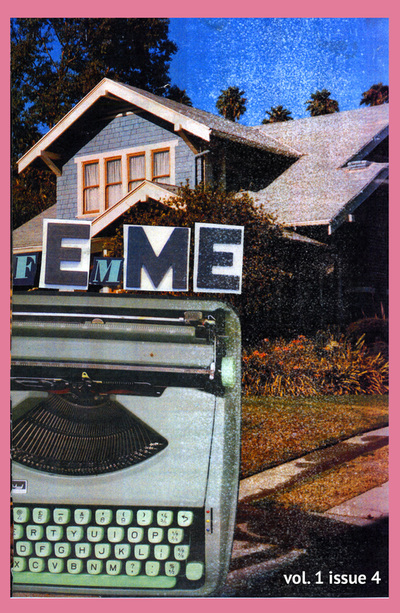 Issue 0: Ceci n'est pas (2012)
Labeled Issue 0 because it's a blueprint of sorts, a short tester zine where I worked out the ideas I wanted to explore with F.E.M.M.E. and the thinkers I thought could help me do so (read: lots of Audre Lorde quotes).

Issue 1: I Would Say... (2013)
This issue is where I began explicitly thinking about the ways that we work to narrate life to ourselves in order to make sense of it. It's a tangle of ideas I've continued to revisit in subsequent issues. I also included published writing by Ta-Nehisi Coates and Rickie Solinger, to guide me as I figured out how to address racism and sexual justice in my own words.

Issue 2: Too Late to the Riot Grrl Party (2013)
A zine about figuring out the person I want to and can be as I settled into a less nomadic life and worked toward becoming a post-college adult. Either shortly before or after I made this zine I was briefly hospitalized for depression, and my struggle to find stability is clear in the text of this issue.

Issue 3: Queer Theories of Silence (2013)
Most of this issue considers the benefits of choosing an articulate/legible identity versus occupying a more ambiguous or unnamed category--visual art and the language of theory undergird these questions. These questions were almost certainly inspired by the fact that I was in my first queer relationship at the time.

Issue 4: #mensrights (2014)
One of the most thematically coherent zines I've made, #mensrights seeks to undermine arguments put forward by purported "Men's Rights Activists," who claim that feminism has so succeeded in contemporary Western culture that men are now victims of oppression on the basis of their gender identity. Spoiler alert: I disagree vehemently with this argument. 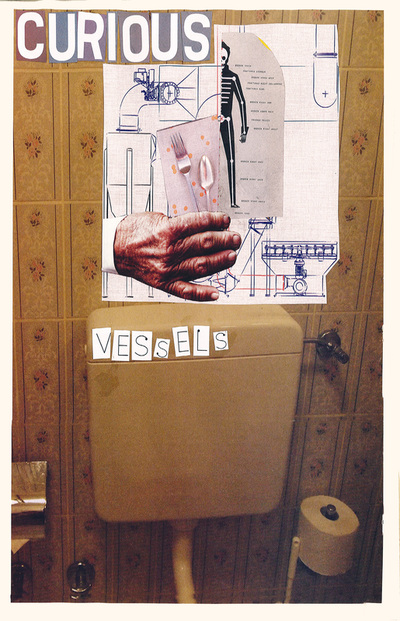 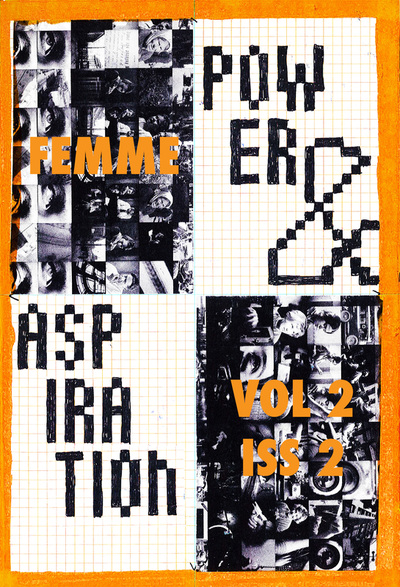 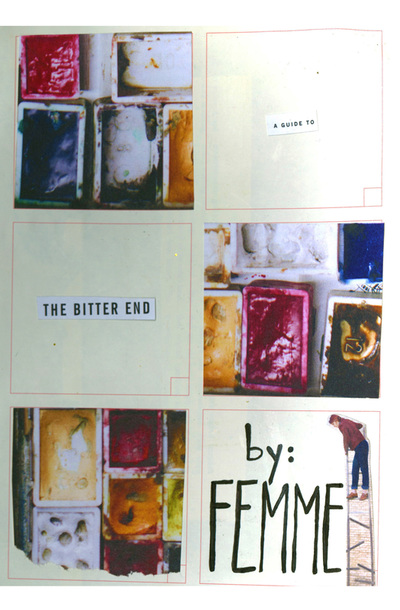 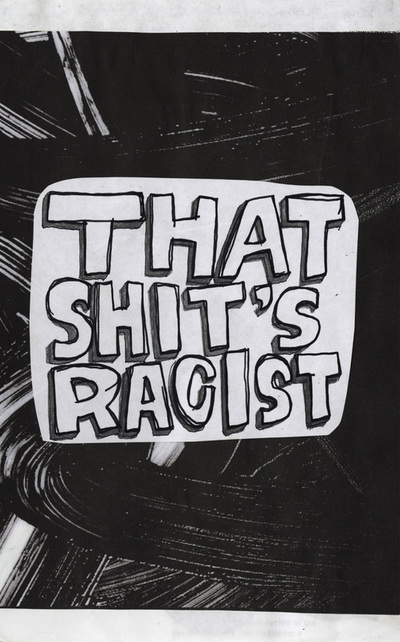 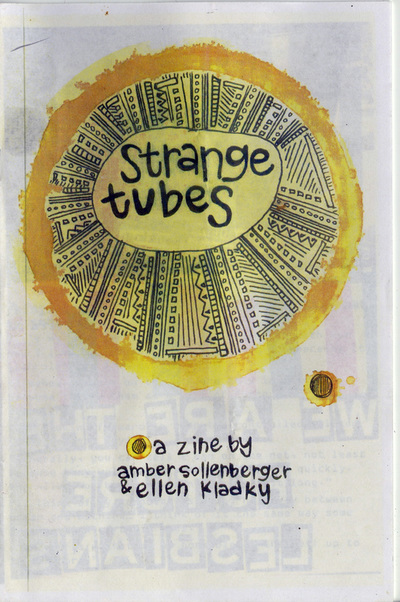 Issue 1: Curious Vessels (2014)
A collaboration with a former girlfriend for an undergraduate conference in the gender & sexuality studies department of our college. The theme of the conference was "food and the body," we went from there. I wrote and designed the first half, she did the second half.

Issue 2: Power + Aspiration (2014)
This is a very long zine I made as I was ending one relationship, starting another, and feeling both comfortable and encouraged by my growing group of queer friends and fellow creators.

Issue 3: Guide to the Bitter End (2014)
Parts of this zine were made on a trip to Portland, OR, and the rest was put together in Chicago on the tails of an academic conference about trans* representation where I got to meet and chat with one of my queer role models, Ariel Schrag. It was nuts! For weeks I was on a high from the feeling of queer belonging I got from this conference, and much of this zine looks at those feelings.

Issue 4: That Shit's Racist (2015)
Based on research and writing I did for my undergraduate thesis, That Shit's Racist addresses ways that our culture creates and promotes narratives about people of color and their behaviors that contradict empirical information, as a means of demonstrating that racism is guided by irrational beliefs that are often considered "common sense." I focus more specifically on ideas about welfare, sexuality, violence, and housing.

Issue 5: Strange Tubes (2015)
Another collaboration with the same former girlfriend, this time for a graduate student conference. The theme was "engendering change," and we chose to make a zine exploring the ways the internet has helped to shape queer identities in the past few decades. 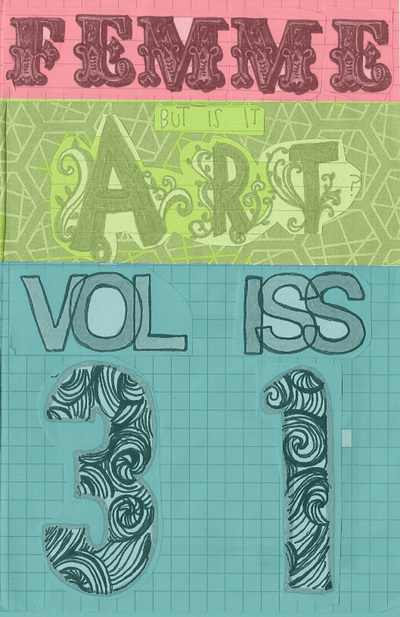 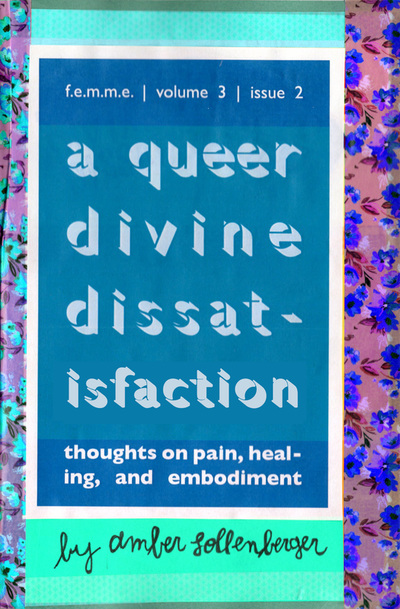 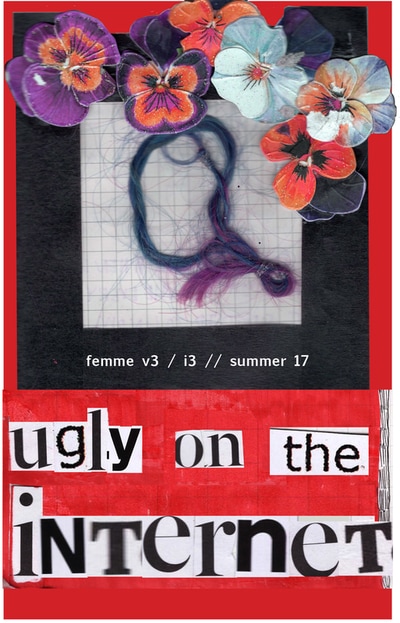 Issue 1: But is it Art? (2016)
After finishing several zines for Chicago Zine Fest in 2015 and feeling a general sense of overwhelming media saturation, I struggled with an immense of amount of self-doubt and sense of total worthlessness. Eventually I was able to channel this into a zine about how I was convinced I couldn't make anything and that everyone I know is more talented than me
Issue 2: A Queer Divine Dissatisfaction (2016)
I took a bit of a hiatus from "personal" zine-making, both because I was very sad and also because I was focusing on working on the housing discrimination project (which is currently on hiatus because I love starting things I can't finish). Finally motivated by a friend's invitation to participate in the upcoming group show "Queer Date" by GenderFail, I cranked out this zine exploring, as the subtitle suggests, my struggles with depression and insecurity, especially as they related to my body.
Issue 3: Ugly on the Internet (2017)
Bored and frustrated with a lot of internet discourse about beauty, I set out to make this zine to figure out what it could mean to be "body positive" even as a person who often does not/has not liked her body. Honestly, with this zine and most of my projects, the final product doesn't really capture exactly what I had imagined when I was putting this together--but I also think I tend to be more negative about my projects just as a finish them, and then I feel a bit more confident in them as time goes by. In any case, it seems fitting that I would have some ugly feelings about zine on ugliness.